After nearly three years on the road, from Canada to Argentina, I decided it was time to head back up to the Northern hemisphere.

Via DriveTheAmericas.com I found the contact for a shipping company, K-Line which has an RORO (roll on roll off) shipping service from Argentina to a number of ports along the Atlantic coast all the way up to Florida. As I was planning to relocate to Mexico for reasons mentioned in this post, I decided to have the vehicle shipped to the port of Veracruz (6 hours from Mexico City).

The export process was fairly simple. I emailed the company my vehicle details including weight, dimensions, make, model, year, VIN number and license plate along with the date I wanted to ship and the location I wanted to ship to. Once they had that information they sent me the details to drop the vehicle off in Zarate (1.5 hours from Buenos Aires) and a quote of USD$850 for shipping costs (to be paid via wire transfer by the time the vehicle landed in Mexico). 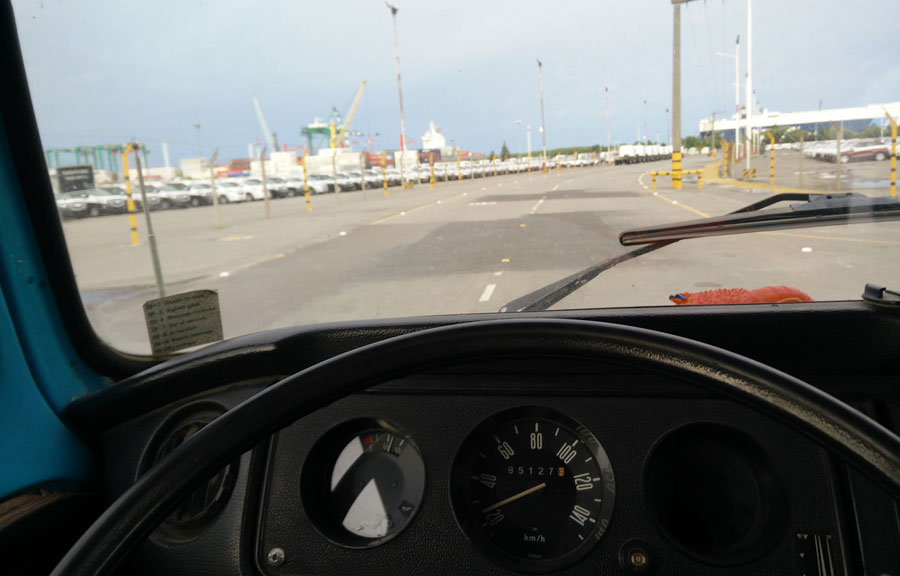 I dropped the vehicle off at the port, paid the USD$150 port fees and was given a receipt for the vehicle.

Nearly one month later I got notification that the ship was arriving in Veracruz, Mexico. I went to a bank here and paid the USD$850 shipping fee to K-Line. After which I emailed them a scanned copy of the receipt. They told me the payment was confirmed and I would be able to pick the van up the following Tuesday. They told me all I needed was the Bill of Lading (which they had emailed), the required documents necessary from Aduanas (Mexican customs) and I would be on my way.

With that I headed to the coast with Annie via bus. We arrived Monday night excited to retrieve the van the following day. Thinking the process would take two days tops (based on the Panama-Colombia shipping experience, we only brought one change of clothes each. Little did we know the bureaucratic nightmare we were in for.

The shipping company K-line didn’t give any instructions as to where we could pick up the vehicle, they simply said I could pick it up at the port. So our first stop was Administracion Portuaria Integral (API – the port administration building). They informed us we needed to go to Aduanas (customs) which was a five minute taxi ride away.

We arrived at Aduanas and they told us we would not be able to retrieve the vehicle without an agent. Further more they gave us a list of documents we would need to collect before they could do their part in the process (they did not include where we could get the said documents or find an agent).

From Aduanas we went to Bajercito and arrived at 1:30pm. They informed us that although they were open, the temporary import permit could only be made between the hours of 9am-1pm. They also gave us a list of documents we would need in order to get the permit. They noted that photocopies were fine (as I realized I had forgotten my ownership in Mexico City, but had a photocopy of it).

Having just missed the 1pm cut off we headed back to API to pay the $0.50 fee. When we arrived at 2pm we were told that the office was closed until 3pm (who makes these hours!?). We waited around for an hour and made the payment.

we started off by going to Banjercito for the temporary import permit. When we arrived we were informed that despite them telling us we only needed photocopies, we would indeed need the original ownership document for the vehicle which I had stupidly left in Mexico City by accident. We called Annie’s parents and luckily they were able to get the document from my bag and send it via DHL (arriving the next morning).

From there we went to CICE to pay the port fees. After a ton of headaches they informed us we couldn’t make payment for the port fee until we had the re-validated bill of lading. They said we could get this at API. We went back to API only for them to tell us we needed to get it from K-Line. We went back to the hotel and contacted K-Line asking them to send us the re-validated bill of lading. To which they responded it wasn’t necessary as they had informed the port of our payment.

I insisted they send me a re-validated bill of lading and they said I would need to go to their local agent to process the paper work. By this time the local agent was closed and another day was done.

Is your head spinning yet? Because ours were. The DHL arrived at 10am and we headed straight to the Banjercito to finally get the temporary import permit. Luckily we arrived the day the manager was training a new employee (did you catch the sarcasm?). She made a point to inspect every single word of each document and make sure every word of the corresponding photocopies matched. No joke. After all was said and done we were at the bank for an hour and a half but finallllly had the temporary import permit. The lady “assisting us” seemed to be enjoying how difficult she was making the process. Keep in mind when I entered Mexico in 2013, the same permit took less than 10 minutes to process.

From there we headed to the office of the K-Line representative. 30 minutes or so later we had our re-validated bill of landing. We were on a roll! Only the CICE port fee and Aduanas to go. We headed to CICE with all required documents and photocopies. After a lot more confusion and waiting we had our port fee paid! Now we just needed to get authorization to enter the port (as we were not licensed agents). Going back to Aduanas without the authorization form would surely have been another rejection. CICE informed us that we could get the authorization from API offices. So we headed to API. 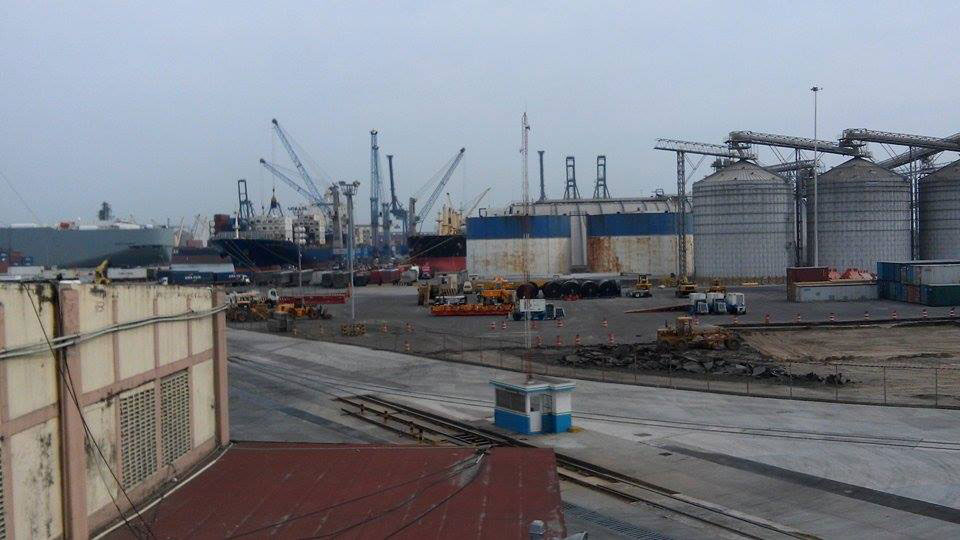 can you spot the hippie van?

After checking with two different offices in API, some helpful soul got on the phone and figured out that in fact CICE was the agency that needed to allocate the authorization to enter the port. But wait, CICE just told us to go to API for that… Hmmm, back to CICE.

Upon arriving at CICE they acknowledged that in fact they could make the authorization document so we could enter the port. How helpful. We got it and finally felt we were unstoppable. Surely we would soon have the hippie van back.

The next morning we headed back to Aduanas with all the forms and copies. We were told we would need to create an additional declaration and submit it to SAT (Servicio de Administración Tributaria / Tax administration service). Then we had to have the van inspected by Aduanas (a separate office from the administrative one we had been dealing with).

After having the van inspected by Aduanas (finally seeing the van for the first time in over a month) and there drug sniffing dog, we went back to the administration and they told us some internal paperwork would have to be made and that it might be ready that night but more likely the next day. 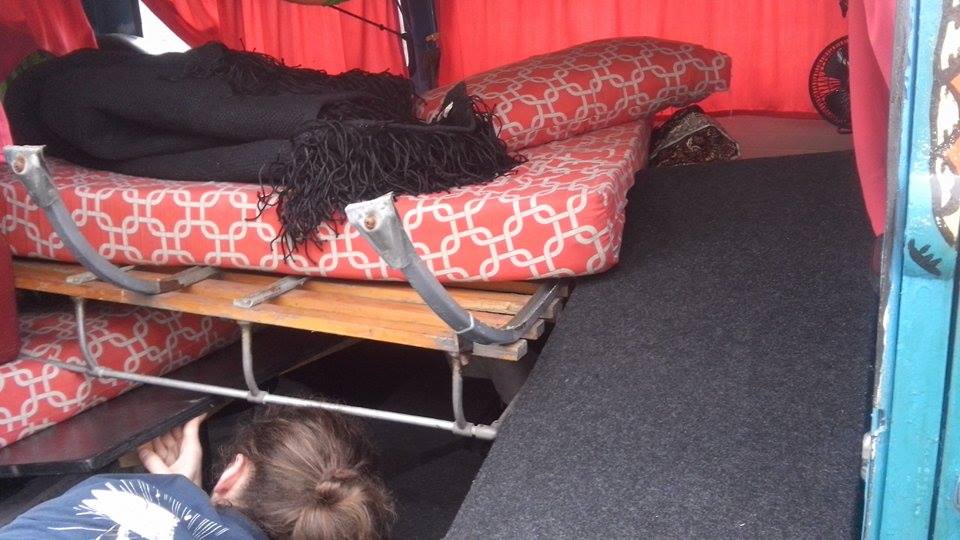 we got a call from Aduanas at 10am and returned to hopefully retrieve the hippie van. All the paper work had been processed and now all the was left was to pick up the van. But for that we had to go to a separate entrance to the port. They told us “go to API” so we went to the main API office. There they told us that we had to go to another entrance between API and the Aduans (keep in mind the port is huge). We got there and they let me through the security with my authorization form but Annie had to wait at the gate. No worries it would only be a few minutes to grab the van and drive out right?

Upon passing through security I asked where to go and they said the internal office of CICE (a 5 minute walk through the port. I started walking and when I arrived I was told that my vehicle wasn’t being stored in CICE’s terminal (despite the fact that I had paid CICE for storage and handling). They told me that because the API and Aduanas paper work said the vehicle was being stored at CICE when in fact it was in an API terminal, we would need all the paperwork revised before the vehicle could be retrieved.

After 5 days in the same clothes, countless head banging encounters and bureaucratic horse shit, I used every ounce of patience and diplomacy I had left with me and convinced one of the CICE administrative port workers to help me get it corrected. I should also note that it was now Saturday and that the port would be closed Sunday as well as Monday due to a civic holiday.

The CICE worker drove me through the port to the API administration (a backend office I hadn’t visited before. We got the port release form modified and headed to the terminal where my van was.

The Port of Veracruz Mexico

After showing the documents to two different terminal managers I was set to go. All I had to do was drive off into the sunset right? Nope, I had to get inline behind a couple hundred transport trucks and pass through the final customs inspection. They searched the van one more time just in case their drug sniffing dog missed anything the day before.

An hour later I was finally outside of the port, with all my documents and free to roam the world once again. With that I headed back to the entrance where I had left Annie waiting for me as the one I got shit out from was 15km up the road (no exaggeration).

Annie was worried half to death as I had disappeared for almost two hours and I had no way of contacting her. Like I said, who would have thought there would be so many hoops.

We went for lunch and then hit the road back towards Mexico City. Five minutes later the van dies and I realize there is no gas. Note my gas gauge hasn’t worked since I got the van. I have tried multiple fixes but nothing seems to work. I’m thinking it’s a bad ground. So normally I count KM’s in order not to run out of gas. From Canada to Argentina I only ran out 3 times, so the system isn’t half bad.

I had filled up the tank right before putting it on the ship in Argentina. My thoughts are they port/crew either stole my gas or removed it for safety reasons. 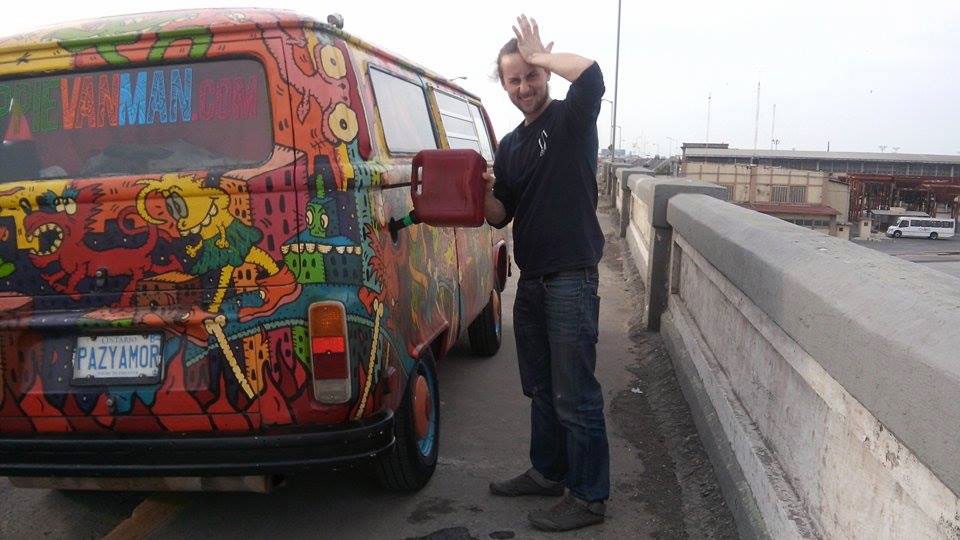 Without batting an eye, Annie grabbed my spare gas can and hopped in a Taxi to save the day. And this brings me to the moral of the story, or one of them at least. Having a great partner in crime can make even the most challenging and stressful situations bearable and even humorous. Despite all the bullshit of the previous five days, we had a few laughs at the absurdity of it all, and drove away smiling. I was also relieved to find that nothing had been stolen from the van, as is a common problem with roll-on-roll-off service. The hippie van was truly worth the struggle and I’m glad I’ll be cruising in her for a while longer. 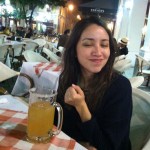 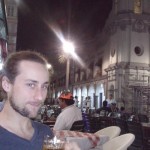 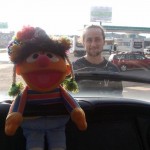 Stay tuned for more adventures. Don’t forget to follow us on social media.