Over the past few months I’ve been trying to get a better insight into how long my hitchhiking trips have been. It has also inspired me to take a look at the current leg of my three-year trip and tadaaa! turns out I was about to cross the 20.000 kilometers hitched mark in South America alone. That’s actually pretty slow! For non-metric people: that’s 12.427 miles by thumb and foot overland.

Why do I care? I don’t. Other people seem to care, though, and keeping some statistics can be fun. Other people asking stuff is the main reason I have (guesstimated) answers to questions like “How many countries have you traveled to?”, “What’s your average waiting time?” and “Where are you from?” . It’s the other people that get a little bit of insight into my life by asking these questions – and I’d like to answer them as accurately as possible.

Since it’s other people who are asking me these questions, I don’t understand the hate towards country counters. They say “you shouldn’t put a number on travel” and “stop ticking off the countries, experience them”. Why? I better have answers; it’s one of my most-asked questions!

Every now and then, you get to a nice and round number, like 20.000. It’s pleasing to the eyes. Besides, it’s just fun to have a reason to celebrate something. It’s a friendly number if we’re talking about kilometers hitchhiked in South America. Because I’ve been in South America for one year now, you can do even more fun things with that number. On average, I’ve been moving at a speed of 55 kilometers per day (20.000/365) for the past year, even on days I didn’t hitchhike. That in turn adds up to moving 2.3 kilometers per hour. Even in my sleep I’ve been moving about!

Admittedly, I have no clue if that’s a lot or very little compared to another 25-year-old with a different lifestyle. I think there’s many people with a daily commute of more than 55 kilometers, either with their own form of transportation (bike, car) or with public options. I just know that I spent my last year traveling a great number of kilometers with nearly no overlap on the routes I’ve taken, which I call “backtracking” , and completely relying on other people’s willingness to have a chat with me in their vehicle. That’s just one way to live, and it happens to be something I enjoy. Many people think hitchhiking is awfully tiring and time consuming. They wouldn’t swap with me and frankly, I wouldn’t want to swap with them. No choice is better; it’s all just personal.

Just don’t let anyone tell you that hitchhiking isn’t a valid mode of transportation!

Do you keep any personal statistics? Do you think hitchhiking is an underrated way to get around? Or completely overrated? Have any suggestions for stats I ought to keep track of? Leave a comment! Take a peek at some of my previous hitchhiking routes on my trips page. 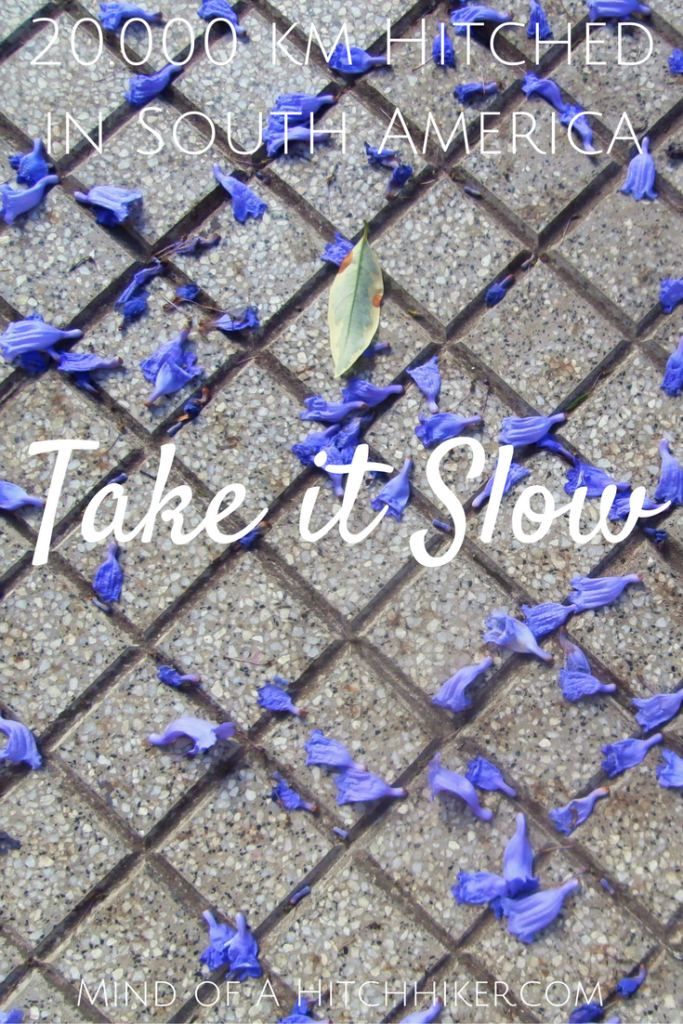 The post Take It Slow: 20.000 km Hitched in South America appeared first on Mind of a Hitchhiker.

Riding a Motorcycle in Georgia (the country in the Caucasus region)